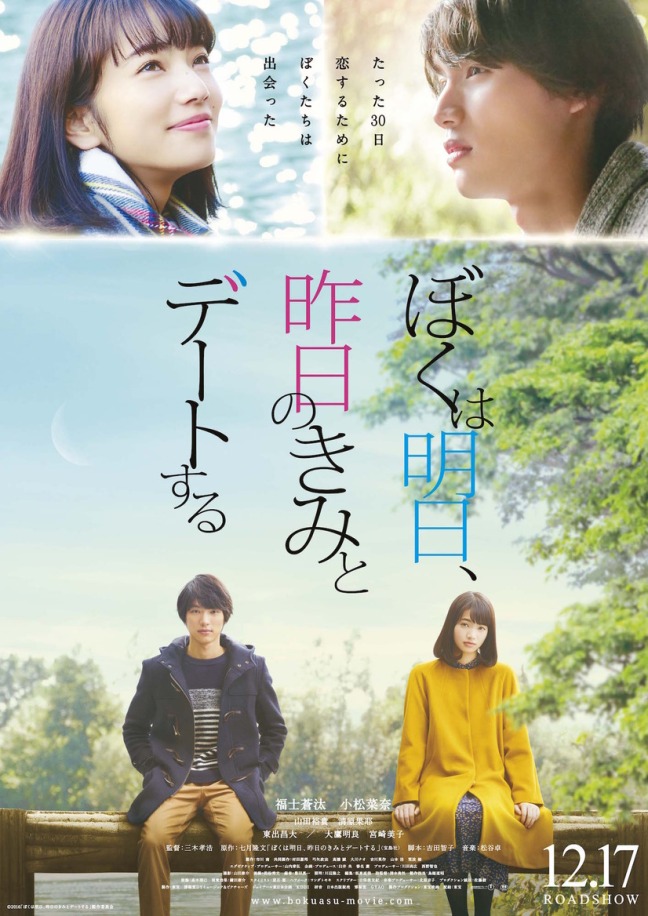 Plot
On a train to the school one day, Takatoshi Minamiyama sees Emi Fukuju and falls in love with her at first sight. He follows her, boldly tells her he likes her and they start to date. One day, Emi tells him that she has a secret.

Review
I was mostly confused while watching the movie, and it’s mostly because i was trying to make sense of the concept. Okay, i understand the theoretical piece – the boy’s time is like the normal person but the girl’s time is in reverse. The movie was shown from the boy’s side but while watching the movie, i was also trying to track the story from the girl’s timeline so i got confused. Turns out in the end, they did show her side which somehow made sense. it goes back to what the guy said, we are not just passing by each other, but we are in a connecting loop. except there is only one loop and it doesn’t go on and on right?

I have so many questions about the whole concept – like why them? how does the time work etc but i’m still too confused to even starting asking those questions. haha.

i think this movie was heartwarming and beautiful, but you need to think about it to fully appreciate the story. I felt bad for them – like they will only get to see each other every 5 years and they only get to be 20 years together for 30 days, then we see their contrasting ages. It also felt creepy coz they know each other from the girl is 35, the guy was 5 years old and vice versa. But they meet at 20 years old, fall in love and have sex. Creepy right?

and again back to my question, why start at 35 years old and 5 years old? that means one is 40 years old, the other has not been born yet. so do they die at 40? do they never see each other beyond 40 yo? So confusing! argh! hence, for me, while it is a connected loop, it only goes one time and does not continue looping (right? or i got it all wrong)???

I think if you like time travel romances, or doomed romances you will love and cry in this movie. For me, this was okay, the concept is too interesting but too weird.

Woot woot! It’s about time! I’ve been waiting the entire year!!! Hope there is group photo and hitouch! Definitely getting VIP seats! 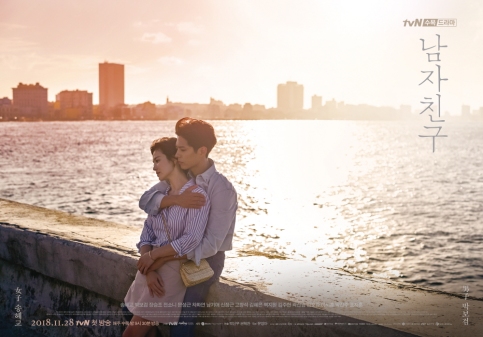 Plot
Cha Soo-Hyun is the daughter of a politician aiming for the presidential elections and she had an arranged marriage to a chaebol son who is supporting her father’s campaign. They divorced when her husband had an affair and part of the settlement is the Hotel, which Soo Hyun is now the CEO. When she was on a business trip to Cuba, she meets Kim Jin Hyuk, an average guy from a simple family and is also younger than her. They had an unforgettable encounter when Soo Hyun lost her bag and Jin Hyuk helped her. When Jin Hyuk returned to Korea, he got hired in the hotel that Soo Hyun owns.

Review
Note: I watched this drama during the time that the SongSong couple announced their divorce and various rumors were posted online. So i can easily imagine Song Hye Kyo as the divorce with an unhappy married life. (I still don’t know the real story of their marriage so I dont want to speculate who is at fault).

I loved the overall feel of this drama. It was very calming, the cinematography and the soundtrack were beautiful! I wasn’t bored with the show though it was a bit slow in some episodes. The romance itself was okay, I think the two actors looked so good together, but the age gap is so obvious – SHK looks pretty and young for her age, but putting her beside the youthful PBG made her look as old as her age! (or maybe it was her haircut??) While the obvious age gap made the story more realistic, I also felt like the chemistry wasn’t there. I mean, they were actors portraying two people in love — but i felt that’s what they were – actors acting. I didn’t feel the genuine romantic chemistry between the two leads, instead more of a brother-sister pairing. I would have been satisfied if they didn’t end up as lovers, only best friends.

Casting that aside, the overall story of the characters’ romance still went well with me (like if you follow the story as it is without thinking of the acting). They were of two totally different worlds and probably in real life, they would have broken up within a year (or two). Jin Hyuk here felt too perfect – like the writers had a session and wrote down the most perfect and idealistic boyfriend/partner of all time! Not that i’m complaining, PBG just fit that persona so well, I feel like i was sometimes watching PBG and not Kim Jin Hyuk. On the other hand, I felt so bad for Soo Hyun – her life must be a nightmare, having all those pressures from all sides, and still trying to live her own life. My mom, who also watched the show, also commented, why does Soo Hyun never smile? That’s why I could understand why they were drawn to each other. They met outside of their current lives (in Cuba, as equals) and i think maybe that’s why Jin Hyuk wasn’t that intimidated by her. Maybe had they known each other as boss-employee, Jin Hyuk wouldn’t be as daring as he was. Soo Hyun found someone who was super nice and supported her, and was willing to fight for her.

The ex-husband seems like a nice guy, but he was too little too late. He should have taken care of Soo Hyun and protected her from his evil mom when they were still married. No matter what he does after their divorce no longer matters since Soo Hyun will always remember he never stood up to his mom for her. Likewise, Jin Hyuk was smart but seemed like a carefree guy. I felt like meeting Soo Hyun, who was more mature and experienced, made him grow up and man up. I loved how Soo Hyun starting opening up after she met Jin Hyuk. She is still young and she has the right to be happy. To choose her own life. Who cares if Jin Hyuk is not rich or is young? Soo Hyun doesnt need the power or money since she has already has it. The love that Jin Hyuk is giving her is more than enough – maybe even more expensive than all the wealth that Soo Hyun has. I loved the slow progression of their relationship – seeing all their firsts – the salsa dancing, the camera, the “art museum” under the bridge, their fight, their kiss.

Aside from the two main characters, I also love both of their dads – for being supportive and understanding of Soo Hyun and Jin Hyuk. What i can’t believe in this drama were the 3 mothers! Seriously! The evil mother in law was cray cray. I know she is just protecting her own family and reputation, but why does she have to ruin Soo Hyun? Doesn’t she know the more she ruins her, the more it will damage her family?

And Jin Hyuk’s mother — i know she is only worried for Jin Hyuk but she is supposed to support his son! She knows he has a very well mannered son, i can’t believe she is so selfish. Jin Hyuk’s dad totally deserves to scold her. and the nice Jin Hyuk, heard what his mom did and instead of getting angry at her, he even understood her (seriously he is nice guy!).

But the worse mom of the year has to be Soo Hyun’s mother!!!! She is so angry at both the husband and Soo Hyun for ruining her ambitions to go to the Blue House — ugh, what has she done? She is useless and keeps harping on her family. I’m surprised Soo Hyun’s father didn’t divorce her. And instead of getting what she deserved in the end, I can’t believe she even got a happy ever after! I mean, Soo Hyun was also nice to her and they even made up! I dont even remember if she ever apologized to Soo Hyun.

The only reasonable woman in the show was the tea lady. She was more like a mother to Jin Hyuk than the real mother, seeing that he went to her for advice, and first introduced Soo Hyun to her. She was not judgmental, and listened to both sides.

Regarding, Soo Hyun’s friend/secretary and Jin Hyuk’s moon snails friend, i actually thought at the start that it will be fun for them to be together, but I didn’t like the secretary’s judge-y attitude. I think JinHyuk’s friend deserves someone better than her – someone who will be proud of him – and not always looking embarrassed to be with him.

The girl friend who likes Jin Hyuk was cute, again, too bad, she didn’t act on her feelings earlier on. I was dreading that she might turn mean and bitchy – but of course Jin Hyuk doesn’t have bitchy friends (haha). She is so sweet and I thought she makes a better pair with Jin Hyuk’s cutie brother.

The episode where Soo Hyun broke up with Jin Hyuk had me cry so hard. She wasn’t being noble idiot – it really made sense for them to break up. PBG is a good crier!! I really felt bad for him. I wanted to reach out and hug him and make him stop crying. Then he stopped crying and fought for his girl. Wow. Soo Hyun is one lucky girl. I imagine even after the show has ended, Soo Hyun and Jin Hyuk will still be together, all happy and married and with a little baby!

"My heart is crammed full of you. Can I just love you? Will you take me in?"
#YoungLadyandGentleman Ep 27-28
The boys play cupid to YG and Dandan! They found a way to bump into each other in the bookstore, have dinner and watch a movie. And YG so happy seeing Dandan enjoy the movie.
When YG was 22yo, he got engaged to Sara because he thought they dated. Now his memory is back, he knows Sara lied to him, and yet he decides to push through with dating her and breaks up with Dandan. I commend him for being true to his word but dang i want Lawyer Ko to slap his head! I guess he still doesnt love Dandan enough to fight for her.