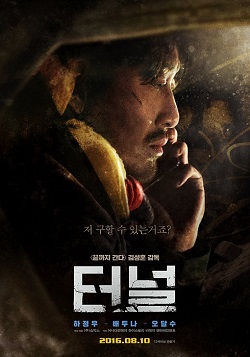 Plot
Lee Jung-Soo drives home for his daughter’s birthday. While driving through a tunnel that crosses through a mountain, the unthinkable happens. The tunnel collapses. When Lee Jung-Soo regains consciousness, he finds himself trapped inside his car. The car itself is buried under thousands of tons of concrete and debris. All he has inside the car are his cellphone, two bottles of water and his daughter’s birthday cake.

Review
I did not read the plot when I watched the movie – i was expecting some monsters causing the tunnel to collapse haha – but like every typical korean movie, the lead is always a family man – married with a child (think of Train to Busan) – i guess it’s supposed to evoke emotion and sympathy for the lead, which is not bad. However, the movie did not really focus on that aspect, but more on how Jongsoo survived the ordeal while waiting for the rescue team to get him out of the tunnel. This movie also makes you think – should you try to save 1 life at the expense of another or at the expense of the common good. The government was using all their resources and manpower to try to save him and losing millions every day – so is it worth saving one person’s life when they don’t even know if he’s alive or not?

What the movie failed to tackle was asking the big question – why did it collapse in the first place – the movie mentioned that most of the tunnels were not meeting the standards, and yet, there was no investigation – instead the government was angry that they could not continue with the second tunnel. hello – what if it collapses again? definitely they should stop and investigate and charge those people who mishandled the construction of the Hado Tunnel! they were lucky that there were only 2 people that got trapped. what if there were plenty? then would it now be a national disaster?

i felt for Jongsoo – he was trapped – yet I’m amazed that he was still able to help Mina – sharing his water when he barely had any and comforting her. There were times when he felt frustrated and wanted to give up – i probably would have given up earlier – you can see when the dog ate the cake, and when he found out they drilled the wrong place, and when Mina died – amazing fighting spirit he had – definitely helped that his wife was there supporting him – i know how difficult it must have been for the wife to sign the papers and basically leaving her husband trapped forever.

another plot – i was also wondering if there was any way for Jongsoo to get out. he seemed like he just waited most of the time and wasn’t that resourceful or didn’t even try to move the rocks – again maybe i expected more because when he found out that he will no longer be rescued, i thought he would finally step up and try to save himself. well, he did try but then they bombed the area, causing more rocks to fall and he barely made it inside.

The dog – how did he survive more than 30 days without food and still look so energetic?? and im surprised it took so many days before the phone battery drained, considering he was calling people and kept it switched on. the car battery – not sure how long it was supposed to stay on but the radio was a nice touch for communication when his battery died.

of course, the ending was happy – i wished there were more post-rescue meetings between Jongsoo and his rescuer – and Subin gets the puppy (i dont think it’s a puppy anymore though!). The last scene was the couple going through another tunnel – that must have been horrifying for Jongsoo – but his wife was there holding his hand. Aww.

Overall, despite the minimal action, the movie didn’t feel boring and kept me interested the whole time!