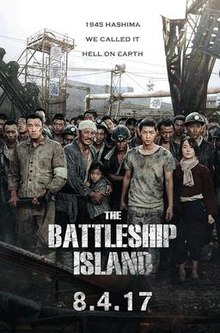 Plot
During the Japanese colonial era, roughly 400 Korean people, who were forced onto Battleship Island to mine for coal, attempt to escape.

Choi Chil-Sung (So Ji-Sub) is the top fighter in Kyungsung (old name of “Seoul”). He makes troubles on Battleship Island, but he has a warm heart.

If you don’t think too much about historical accuracy or analyze the whole movie, this is an interesting movie to watch. The movie was visually stunning and seemed to look too real and authentic, like you were transported back to that time and place. The images were at times shocking and brutal, showing the harsh conditions and treatment that the Koreans in the island faced during the war against the cold and calculating Japanese. There were a lot of gruesome deaths and a lot of tears – showing the sickening and heartwrenching impact of war to everyone – from the men, women and child(ren). Some of the scenes were hard to watch but my eyes stayed glued to the screen and never got bored. The entire cast was good – not just the key characters – but even the side characters and the rest of the actors/actresses showed passion in their acting (most likely because the theme/topic felt too close to home).

So now I’m home and in front of the computer (and away from the beautiful face and tormenting eyes of So Ji Sub – lol!), how did i really find the movie? I think for the most part it was great – it had all the possible themes for a war movie – action (fighting and deaths), drama (tears, love), nationalism, a little bit romance, betrayal, good vs evil, we will survive and escape together, but there were times it was uneven. I will try not to post too much spoilers but I felt like there was a giant shift in the storyline on the third act. Before coming into the movie my expectation was that the movie was about Koreans trying to escape the island but halfway through the movie there were no plans of escaping at all. Instead I watch as Park Moo Yung (who came out of nowhere) secretly plot and plan to help Yoon escape – apologies but I’m not familiar with Korean histroy during this time – so I thought maybe they will let him escape and Yoon will change the “war” and help liberate the Koreans from the Japanese. His plan failed ( i actually like the huge twist in the story) ) as well as the rest of the story moving forward. I thought it was a pretty strong plot but when it didn’t happen, the writers, didn’t know what to do or how to move the plot along suddenly, we see Park Moo Yung change his mind (maybe because he briefly interacted with Sohee?) and started helping them get out of the island when he heard that everyone will be killed. and so the exodus (and the main act) started. I thought that was a huge shift of story that didn’t really make that much sense but it had to happen. Also, the mood/tone of the movie was uneven – at times they were happy and playing light jazz music and father/daughter bonding, at times it was brutal with all the guns, broken bones, blood, fighting. I guess the movie tried to put some lighter tone at some parts of the movie so that it doesn’t feel too heavy for the audience – most of the time it works but other times it was hard to think that they could still be happy when they were in that situation already – or maybe that’s the human spirit showing – how resilient people are.

As for the characters, there were a lot of them and I felt it was too bad that they could not give all the characters justice and chance to shine. I think definitely Hwang Jung Min was the main character and actor in this movie (even though it was mostly Song Joongki who got the most media exposure – i think they were trying to woo International audience). He had great chemistry with Kim Suan (who plays Sohee). I loved all their scenes together and I could really feel the love and partnership they have. I think their characters were more developed than the rest because we know where they worked before, how they got to the camp and why they had to get out of there (because of the kid!). Suan is a great young actress, who can cry on cue and make these cute faces that you really want her to live. But i find that her character was a little too much like her character in Train to Busan – almost the same storyline, she is running away with her father and trying not to get killed by the zombies/Japanese – same heartbreaking crying face (which i think the director was exploiting too much – especially at the last scene) to elicit sympathy from the audience. I’m a fan of Song Joongki but i thought his character (Park Moo Yung) was flat – we see him getting orders from when he was somewhere in the desert to get Yoon out but we dont know how he got into the island. He just magically appeared in one scene and stayed there for the rest of the movie. We don’t know his background (except for saying he trained with the US, etc), why he needed to be there (it seemed like he was just taking orders but didn’t really care about the rest of the people in the island). That’s why it was hard for me to root for him – i felt like he was just put in the movie as eye candy, huge draw in the box office, and to have a “hero” who helps the bumbling musician and kid and the rest of the people get out of the island. Certainly we dont expect Kang-ok to lead the team since as the movie has shown, he wasn’t a fighter – he was a musician who used his brains and connections to get ahead. He did have a heart though, which i didn’t see much from Moo Yung until the very end. Lee Jung Hyun was also underused – she was the only female lead actress but she wasn’t utilized that effectively. Yes, she did fight the Japanese men but I wish she was the force that can unite the ladies in the island – i was expecting her to become the lead captain of the comfort women who will retaliate against the Japanese and rally all the girls to fight or carry stuff, etc but most of the time her scene was with So Ji sub’s character. Which is another plot that was under developed. The chemistry and sexual tension between the two was so strong but movie didn’t capitalize much on it until the end, when they were side by side trying to keep each other alive.

And to the last character – Choi Chilsung – I thought he was a very interesting character and was actually the real hero in this movie. As soon as he came into the island, he was very tough and strong – he answered to no one. One of my favorites scenes were actually all with him – the first one was the bathroom fight with the team captain. Early on you will see why he’s the hero – on the outside you would think he is just a gangster who wants the power to lead the Koreans there, but actually i thought he would rather take the lead than to see another a**hole Korean treating them badly. At least he can keep everyone in line and protect them in case the Japanese tried to do something to them. In the second half of the movie, So Ji Sub almost became secondary to Moo Yung and Gang ok because of the plot – which i found weird because looking at the dynamics of the team, he led the team, he had the trust the loyalty of the men, but MY and GO didn’t even think of soliciting his help to accomplish their goal. When the Japanese killed a schoolgirl to setup Chilsung – he stepped up so that the other Koreans will not get harmed – i though that was another leadership quality he possessed. He took care of his men by sacrificing himself even if he did nothing wrong. and we see that it took fruit became when the whole-we-have-to-get-out-of-here plan was hatched, his men took the time to get him out of the locked room – if it were any poor leader, the men would have left him there to die. Another leadership quality and why i think he is the real hero? while MY and GO planned to leave the island with the others, he decided to stay – not because he didn’t want to leave, but because someone had to stay to fight the Japanese so they can freely escape. That’s why i feel like his character wasn’t developed too well – From the trailers and the write ups, his character was supposed to be a gangster and was meant to be the brawny but dumb guy and we dont know anything else about him. Was he famous in Seoul? was he the main gangster in Seoul? was he rich? why did he end up in the camp? if he was powerful in Seoul, he surely could have bought the Japanese and not get stuck there so why is he there? And is there really a gangster that has a heart of gold? He protected the Koreans in the island, he protected Mallyeon from getting too much raped. He stopped the fight during lunch and the bathroom. I thought his character and Mallyeon’s character should have had a bigger screentime because they were fighting for something – they were fighting for their country and they were tired of the abuses they faced. So i’m a little disappointed. the last scene where both of them were fighting til the very end. plus the cinematic no audio scene was awesome. CS was not able to keep his promises but at least he made good with one (you’ll know it when you watch the movie).

So overall, i liked the movie even though i thought the story could have been better. Will i watch it again? I probably would. I wish they can actually do a prequel of So Ji Sub’s character’s life before the movie.