Plot: A group of pirates search for the legendary royal treasure.

Review:
I’ve been waiting for this since last year! Sadly, it wasn’t what I was expecting.

The overall mood is light with some comedy. I thought the ensemble cast isn’t as impressive as the first movie but they were still a great team. Kang Haneul and Han Hyo Joo were okay as the main leads but I think that Lee Kwang Soo stole the show as he never fails to bring the laughter.

I wish they gave more scenes for Kwon Sang Woo. He looked badass as the main villain but he didn’t really get to do much and wasn’t that scary. Chae Soo Bin’s character also seemed out of place and was there for comic relief and a side romance for brooding Sehun. The story also felt shallow compared to the first movie.

I enjoyed the second half where there were fighting, more than the first, which focused on the team dynamics and the legend of the treasure. I liked the penguin scene, absurd but still funny. You know this movie really isn’t taking itself too seriously. Little disappointed with the dragons coz we didn’t see them, just the fire.

I liked the ending where the crew would rather have love than treasure 🤣 after seeing the 2 couples together.

Review
I was looking for some silly fluff after a long week of hard work so I decided to watch this movie. This movie continues from the first movie where the two leads decide to open their own private investigation agency. However, the first few weeks they didn’t have any clients until a pregnant lady visits them and tells them that her husband is missing.

No this movie isn’t silly, the overall mood is light, and with the addition of Lee Kwang Soo, makes this movie funny. But the investigation and the case itself is heavy.

I love how Daeman is smart and catches the little clues, combined with Taesoo’s experience as detective. And in the end, they were able to catch the bad guys.

Can we have a third movie please?

My review of the first movie: The Accidental Detective (2015)

Plot: A high school lawyer and a reporter helps wrongly accused suspects to clear their names in court and find the real criminals. They end up fighting against strong and powerful politicians and government officials who will stop at nothing to win the next elections.

Review:
I really loved the Park Tae Yong and Park Sam Soo, they both want money and success yet they forego of it to pursue justice. Esp. Park Tae Yong. I mean of course who doesn’t want to make money? Tae Yong is a great lawyer and can easily work in the top lawfirms and make a lot of money, and even have a chance to be elected as a government official and change the laws, but he held on to his beliefs and decided to work on the ground with Park Samsoo to help the wrongly accused people. But to be honest, I was slightly disappointed – I wanted Tae Young to run for office to aim for the bigger picture, but I guess not everyone is capable and destined to be in office. I think I said it before, I really like Kwon Sang Woo in these types of genres, rather than a romantic lead, and I think he is really good at being the nice guy with heart of gold and his comedic timing is still on point. And he may be an “ahjussi” esp compared to his love partner, Yoo Kyung, but he is still so cute and charming!

On the other hand, Park Samsoo was partly annoying (always shouting about money) but his story is also sad, I would always tear up during the moments with the wrongly accused guys. Bae Sung Woo was wonderful as Park Samsoo – i thought he was loud and too messy looking all throughout the show, but when Jung Woo Sung showed up from episode 17, I realized that I also missed Sung Woo. He has his own charm and style of portraying Samsoo. But i also liked Woo Sung as Samsoo – he still had similar mannerisms, but he toned down the shouting and over the top expressions. And he’s too tall and too handsome to look like a messy down on his luck reporter (hihi).

There are times I’m frustrated with Tae Young and Samsoo, because they keep fighting and it’s mostly because Tae Young keeps making decisions that impact Samsoo and Yoo Kyung without even telling them. He just decides or announces on national tv. Good thing Yoo Kyung is nice and understands him while Samsoo, though angry at first, later on understands his decisions.

Lee Yoo Kyung completes the trio — and for a rookie actress, I think she fared well beside Sang Woo and Sung Woo. I really like her character, although at the first I thought it was weird that she kept crying at every scene because she was so moved. I think she was the glue that held the team together. Without her, Samsoo and Tae Young probably have exploded and had a lot of misunderstandings. She is also brave — wow first she faced Jo Ki Soo on tv, then later on, she went to Kim Hyung Choon’s house and dissed him and told him to step down and let the younger generation take over. Bravo!

This drama was less about legal / court scenes but more on exploring the feelings of the wrongly accused and the real killers. This drama had a lot of sincerity and heart, without being too preachy.

There were 4 major and 2 minor cases — the homeless girl killing at the very start (it was a short intro to Tae Young’s character), Gangneung case (the daughter killed his father for abusing the grandpa), the Samjung 3 men murder case, Osung trucker murder case, the backdoor deals case/korean spy and Seungwoon Technical high school case.

I think my favorite was the Samjung 3 men murder case. We each got a glimpse of the 3 men’s stories and I just kept crying at the big scenes, esp. episodes 9 and 10!! I also loved the addition of Hwang Min Young to their team. She was a badass prosecutor and she finally found other people with the same integrity.

The drama spent too much time on the truck murder case, almost 10 episodes that sometimes there were too much flashbacks, too much rehashed scenes and conversations. I liked the case, but it was just too long. I wished they kept the drama at 16 episodes (18 at most) instead of 20. I did like Lee Won Jung as Han Sang Man but it was hard to listen to “I’m Han Sang Min” for 10 episodes.

The Seungwoo Technical High School case was the last case and oddly, I didn’t find the case as memorable as the previous cases, maybe because the case was shorter and not as heart-wrenching as the others. I loved the last minute cameos of Lee Jong Hyuk, Lee Elijah and Lee Jung Jae.

The final episode was okay but too convenient. The Seungwoo principal and director easily apologized to everyone. Also it felt like they didn’t really take down the bad guys. I’m sure they’ll be back after the publicity has died down. So it goes back to what did Taeyong and Samsoo actually accomplish?

We know there are really a lot of corrupt people in the government, from the police, prosecutors, mayors to judges. It is hard to change the system. Taeyong and Samsoo may not have been able to change the system, but we should also remember that there are good guys out there willing to work hard to ensure justice and truth. and it may not be a big thing to everyone, but for those people they helped, it was their everything. 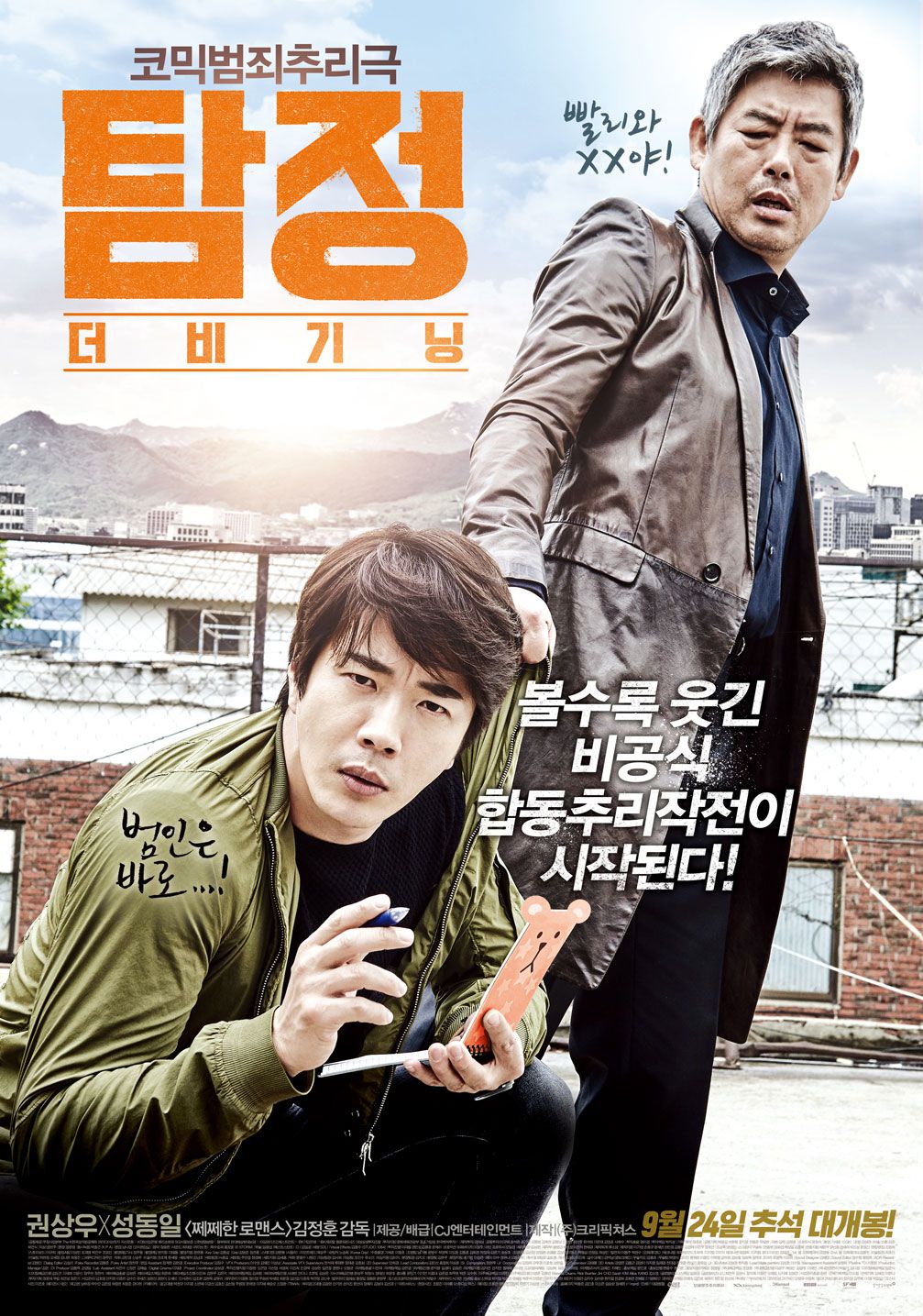 Plot
Dae-Man is a private citizen who loves going to the police station to listen in on his friend and detective Joon So and Detective No talk about their cases and also giving his comments. he is a member of the online profiling club and loves trying to solve cases. One day, Joon So gets arrested for murder and Dae Man forces Detective No to team up and help prove Joon So’s innocence.

Review
I miss Kwon Sang Woo!! he used to be one of my fave actors way back when i was in my early 20s. what has happened to him? he seldoms has movies and dramas lately. I think comedy and action is really his forte. and i miss his cute lisp!

I dont really like Dae-man, if i were his wife i would also get angry at him every single day. However i can understand him – he doesn’t want to be a comic book rental owner. he wanted to be a police but failed because of his knees. he loves profiling and is good at it but he is too annoying. Detective has not even arrested him for obstructing or anything. I didn’t read the review or the story at all so I was racking my brains trying to solve the murders based on the clues that they have. My guess was actually the newbie detective. haha. the whole thing about the “murder exchange” was interesting concept but the way Dae Man explained it was too fast, i was trying to grasp how the whole thing worked. I understood Lee Yuma and Detective Ma, but who was that Han Tae Woong guy? (he looks so much like the arrogant detective i thought it was him) I kinda figures out Yong gyu in the end when i finally connected the dots.

I think between Dae Man and Detective No, it felt like it was Daeman was the brains and mouth and Detective No was following Dae man. but they made a good team. Both hilarious and the comedic timing was spot on! and when they decided to create the PI company together – yay! finally Dae Man will finally earn money while doing what he loves most! Looking forward to the sequel!